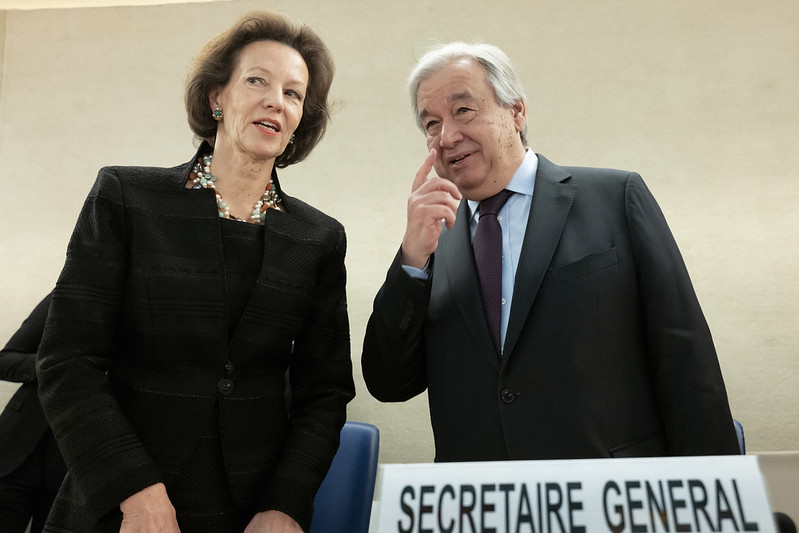 On Monday 24 February, the first day of the 43rd session of the Human Rights Council (HRC43), UN Secretary-General António Guterres launched a new ‘Call to action for human rights.’ Rumours of a ‘major announcement’ from the Secretary-General had been circulating since late last year, and were confirmed by Guterres himself in a keynote speech to the General Assembly on 22 January. In it, he identified four key contemporary challenges facing humanity (he called them ‘the four horsemen’) – increased geopolitical tensions, the climate crisis, growing mistrust, and the downsides of digital technology – and, intriguingly, appeared to declare that human rights pillar must be central to the UN’s response. In that regard, he informed UN member States that he would shortly ‘launch a call for stepped up global action on human rights and human dignity,’ designed to ‘place people and their rights at the heart of our work.’ All this led to a high-level of expectation as delegates convened at the Palais des Nations for the start of HRC43. Unfortunately, the ‘Call to action’ presented by Guterres, while positive in parts, was broadly underwhelming, and represents a missed opportunity to propose the kinds of reforms that could transform the human rights pillar’s operation, delivery and impact.

These developments should be seen against a backdrop of the UN’s historic neglect of its human rights pillar – in both a political and a financial sense. Throughout its history, the UN has consistently emphasised the development and security aspects of its mandate over and above its human rights prerogatives (as defined by the UN Charter). As part of that ‘downgrading’ of human rights, the human rights pillar is not led by a main body of the UN (the Commission on Human Rights and the Human Rights Council were/are both subsidiary bodies), and only receives around 3% of the UN’s regular budget. No recent (i.e. the past quarter century) Secretary-General, with the exception of Kofi Annan, has seriously challenged this status quo ante; and although URG has been relatively supportive of António Guterres’ efforts to strengthen the delivery of human rights via his development system and security pillar reforms, wider civil society has increasingly taken the view that the current Secretary-General is intent on continuing this pattern of historic neglect.

There was therefore a growing sense of anticipation ahead of Guterres’ opening address to the 43rd session; a hope that he would propose meaningful reforms and changes in how the human rights pillar operates and delivers, how it connects with the two other pillars of the UN, and how it is resourced.

In the end, however, the Secretary-General’s ‘Call to action on human rights’ fell well short of these expectations, and well short of the kinds of reforms that the UN desperately needs if it is to effectively prevent crises and conflicts, achieve the SDGs ‘leaving no one behind,’ and protect the dignity and rights of all people everywhere.

The ‘Call to action’ seeks – according to its own preamble – to reaffirm the UN’s commitment to the Universal Declaration of Human Rights, and ‘reinvigorate our pursuit of those enduring rights and values in the context of new challenges and opportunities.’ The Secretary-General’s goal, he says, ‘is to promote a human rights vision that is transformative, that provides solutions, and that speaks directly to each and every human being.’

This is perfectly sensible, as far as it goes. Across the seven ‘domains,’ the Secretary-General accurately identifies many of the principal human rights issues and challenges facing the world in 2020. Moreover, his critique of those issues and challenges is, in large part, both insightful and eloquent. For example, under the domain ‘Rights at the core of sustainable development,’ Guterres correctly asserts that ‘the 17 SDGs are underpinned by economic, civil, cultural, political and social rights, as well as the right to development,’ and only when ‘everyone has equal access to opportunity and choice, and can claim their human rights [will] no one [be] left behind.’ This analysis in turn allowed the Secretary-General to touch upon one of the most important human rights concerns of modern times: widening socio-economic ‘inequality, in all its dimensions.’ All of this means, he noted, that human rights obligations, in effect, underpin and underwrite ‘the political commitments made in 2015.’ In another example, under the title ‘Rights in times of crisis,’ Guterres says that ‘human rights considerations’ are central to his prevention agenda. ‘Indeed,’ he says, ‘there is no better guarantee of prevention than for member States to meet their human rights responsibilities […] There is a well-documented correlation between a society’s enjoyment of and commitment to human rights – including non-discrimination – and its resilience to crisis.’ A key goal of the UN human rights system must therefore be to build human rights capacity and resilience, thus ‘preventing human rights violations,’ and – where worrying patterns of violations do occur – to ‘respond promptly and effectively’ to human rights emergencies/crises. The Human Rights Council and its prevention mandate under paragraph 5f of GA resolution 60/251 must, in other words, be placed at the heart of the UN’s prevention agenda.

Unfortunately the ‘Call to action’ fails to build on such useful diagnoses by proposing the kinds of structural reforms that might allow the UN’s human rights pillar – and indeed, the wider UN system – to effectively respond to the critical human rights challenges identified in the Secretary-General’s paper.

The ‘principles’ presented by Guterres to guide any UN response are so vague as to be almost meaningless. The assertion that ‘human rights are universal and indivisible,’ the promise that ‘our efforts must be characterised by the highest standards of integrity,’ a commitment to place ‘a special emphasis on the rights of women,’ a call for ‘more effective communication about the positive impact’ of human rights interventions, and a promise to ‘enhance synergies between human rights and all pillars of the work of the UN,’ are all well and good, but they hardly constitute a detailed roadmap for action.

It is a similar story with the more ‘specific’ actions listed under each of the seven key human rights ‘domains.’

True, there are some useful and, indeed, highly pertinent proposals, such as, for example, to ‘ensure that human rights principles inform implementation of the 2030 Agenda,’ as the ‘surest way to bring the [Agenda’s] benefits […] to all, leaving no one behind.’ In this regard, the Secretary-General correctly identifies the importance of integrating the outputs of the three main human rights mechanisms (i.e. recommendations) ‘into national development planning.’ In another example, under the theme of prevention, he calls on ‘Resident Coordinators and UN Country Teams,’ to ensure that country risk analyses ‘are informed by human rights,’ and in that regard he reaffirms his determination to ‘expand, as necessary, the presence of Human Rights Advisors to UN Country Teams.’ Furthermore, under the ‘rights of future generations’ theme, he calls for universal recognition of ‘the right to a safe, clean, healthy and sustainable environment,’ and for a greater focus on protecting the rights and supporting the work of environmental human rights defenders. These are all undoubtedly important points and the Secretary-General’s support is welcome. However, such ‘actions’ are in fact already in train at the UN – launched some time ago via initiatives of the Human Rights Council (e.g. on human rights and the SDGs), or through elements of the Secretary-General’s development system reforms.

Notwithstanding these useful proposals, the vast majority of the ‘actions’ proposed by the Secretary-General are so vague that it is difficult to see what value they might eventually have. Calls to: ‘develop an agenda for protection for the UN system, underpinned by a common understanding of the centrality of protection in our actions,’ ‘build upon existing initiatives including Human Rights Up Front,’ ‘launch a dialogue on the more systematic participation of civil society in UN bodies and agencies,’ ‘review and strengthen UN tools that aim to empower civil society, protect civic space and encourage participation,’ ‘create space for young people to participate in shaping the decisions that will affect their future,’ ‘consider ways of more fully involving a wider array of stakeholders in policy processes concerning climate change [e.g. cities],’ and ‘take every opportunity to communicate the importance of international law,’ are all worthy objectives. However, the ‘Call to action’ provides little or no detail about how the UN will proceed, who will be responsible (the Secretary-General, the High Commissioner, States?), or what the timeline for implementation will be.

It is a similar story for those proposed action points that genuinely do contain ‘seeds’ of important reforms, such as the above-mentioned call for a review of civil society participation, as well as intriguing proposals to ‘increase support to member States, including through enhanced capacity-building efforts to national and regional human rights institutions and mechanisms’ (does this refer to ‘national mechanisms for implementation, reporting and follow-up?), and to ‘develop a funding strategy to provide financial stability for the international human rights system.’ Perhaps (and hopefully) more concrete strategy papers covering these ideas will be forthcoming in the near future. But for now, the Secretary-General’s ‘Call to action’ raises as many questions as it answers.

Last but not least, on one issue – prevention – the Secretary-General’s proposed ‘actions’ are simply misguided and would actually represent a step backwards. In his diagnosis, he correctly recognises the central importance of the human rights pillar (the Human Rights Council and OHCHR) in both primary (building national human rights resilience) and secondary (early warning and early engagement) prevention, and – in a more general sense – in building a successful UN-wide prevention strategy. However, when it comes to proposing concrete ‘actions’ on prevention, this understanding appears to fall away completely. Indeed, in the four actions points under ‘Rights in times of crisis,’ the Secretary-General does not mention the Human Rights Council or OHCHR once, and instead talks vaguely of ‘continuing to engage with the Security Council,’ and of ‘creatively using the full spectrum of other tools and channels, including leverage with others, to raise awareness, prevent crisis and protect people effectively.’ Later, under the domain ‘Human rights at the heart of collective action,’ he makes the same critical (and time-honoured – each of the past four UN Secretaries-General has likewise chosen to ‘securitise’ the issue of prevention) mistake. Here, he calls for ‘human rights analysis and information […] on potential human rights crises,’ to be provided ‘to the Security Council and the General Assembly’ – thereby completely ignoring the mandate and prerogatives (indeed the existence) of the Human Rights Council, especially as it relates to prevention.