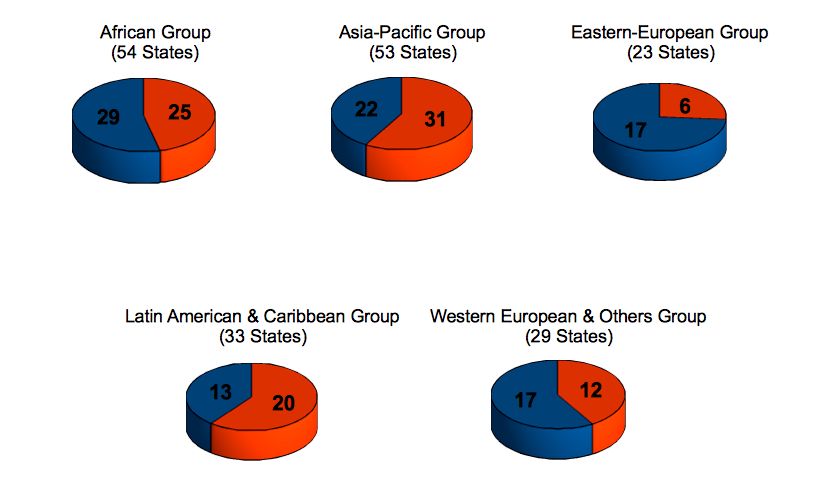 It is fair to say that the results of the latest Human Rights Council elections came as no surprise to most observers. This is not because the winning States had engaged in more dynamic and compelling campaigns than their opponents. Rather, in three of the five regional groups, the number of candidates exactly equalled the number of vacant seats, making a surprise result not simply unlikely but almost impossible. Only an unheard of mass abstention could have altered the result.

The case for genuine competition in Human Rights Council elections hardly needs repeating. The Council is, after all, an intergovernmental body, and both its credibility and its effectiveness are entirely dependent on the character of its membership. General Assembly resolution 60/251 establishing the Council declares that all members must be elected by secret ballot, taking into account the candidates’ “contribution…to the promotion and protection of human rights”. The clear implication is that election to the Council should be competitive. In other words, there should be a choice.

Where there is no choice, the quality of the Council suffers, as does its performance and output. So-called ‘clean slate’ elections, when a regional group puts forward the same number of candidates as there are seats available, undermine the diversity and the quality of the Council’s membership. Elections should promote the participation of a diverse set of countries, from different regions, with different backgrounds, all of which earn their seat by demonstrating their commitment to human rights in a competitive election. Clean slates have the opposite effect.

For these reasons, the fact that three of the five regional groups presented clean slates this last election is deeply disappointing. It is even more so when one considers that this was not a one-off occurrence, but part of a persistent trend.

Since the original membership vote in 2006, only once, in 2008, have the majority of regional groups offered a genuine choice of candidates. In 2010 every single group put forward no more candidates than there were vacancies. Only the Eastern European group has run more than half of the last seven elections competitively. All the other groups have put forward clean slates more often than not, including the Western Group, which appears happier to preach on the issue than to practice.

Furthermore, when elections are genuinely competitive, they are only barely so. Only once has the number of candidates exceeded the number of vacant seats by more than one. The norm in contested elections is to have a single additional candidate per regional group. When there are four or five vacant seats, this still effectively guarantees Council membership to the majority of States that stand. In effect, there are still a lot more winners than losers.

One consequence of regional groups putting forward only as many candidates as there are vacancies is that a significant number of States – just under half – have never stood for Council membership at all, let alone held a seat. The charts below show the number of States in each group which have contested at least one election (blue) relative to those which have not contested any (red):

When set against the supposed universality of human rights, this concentration of membership opportunities and lack of diversity is clearly a concern. Worse, certain sub-regional groups and categories of States are almost entirely unrepresented. For example, no Pacific island State, and only one from the entire Caribbean, has ever stood for Council membership. Similarly, of the world’s fifty or so ‘Small Island States’, only four have ever held Council seats. Meanwhile, regional powers such as Brazil, China, Russia and the UK have all stood for, and been elected to, three separate terms. They have also all featured on clean slates at least once.

There are many problems with a system that operates this way. To begin with, it is clearly open to abuse. A State that is concerned about its ability to win a contested seat need only pressure another candidate into withdrawing to avoid the problem entirely. This introduces regional politics and alliances into a process that is supposed to be international and meritocratic. While it is true that countries ‘competing’ on a clean slate still have to secure the votes of a majority of the members of the General Assembly, in practice no country standing on a clean slate has ever failed to do so.

On the other hand, genuinely competitive elections offer a number of advantages. Without competition, States have little incentive to present a convincing case as to why they should be on the Council. Being better than nothing is hardly a compelling qualification, even if it is not always a given. The greater the number of candidates standing, the more work any one of them has to do to secure a seat. This would go a long way in helping to ensure that the Council is occupied only by the States with the strongest active commitment to human rights.

Equally importantly, competitive elections provide one of the few forms of direct accountability for currently-serving Council members. If a State has failed to exercise its responsibilities on the Council, the General Assembly should have a decent choice of alternatives to replace it come the next election. The prospect of having its seat contested by two or three other States would compel a Council member to think carefully about its record during its term. But if a member knows its seat will be uncontested, it is free to behave however it chooses.

Much rests on the future effectiveness of the Human Rights Council. But one thing is clear: that future will forever be built on sand unless UN member States show a greater commitment to competitive elections featuring diverse and determined candidates operating on equal terms.